From Heraldry of the World
Your site history : Landau (Bad Arolsen)
Jump to navigation Jump to search 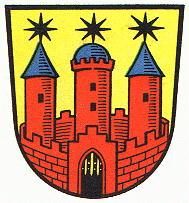 Landau received city rights in 1294 from Otto I of Waldeck. The oldest seal dates from the same time and already shows the castle with the three stars of the Counts of Waldeck. All later seals show the same composition, but the shape and size of the castle changed regularly, according to the architectural style of the moment.