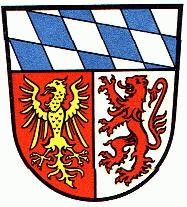 The arms combine in the lower part the eagle of the Counts of Diessen-Andech and the lion of the Welfen dynasty. The first owned large areas in the eastern part of the district, whereas the latter had possessions around Lechrain. The colours are not original, they are the colours of the arms of the Bishops of Augsburg, as the district belonged to the diocese of Augsburg.

The upper part shows the arms of Bayern and the Wittelsbach family, who acquired the district from the two other families in the course of the 13th century.