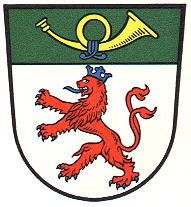 The lion in the arms is the lion of the counts, later dukes of Berg, who owned the area. The horn symbolises the fact that the town grew around a major post station of the Thurn und Taxis postal service in the last century. The station was situated on a major crossroads Köln-Düsseldorf and Solingen-Hitdorf.