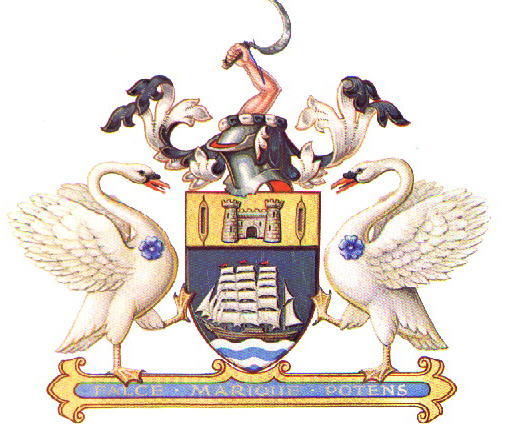 Arms : Sable, on water barry wavy in base a four-masted ship in full sail proper; on a chief Or a castle between two shuttles palewise also proper.
Crest : On a wreath argent and sable, An arm embowed grasping a corran proper.
Supporters : On either side a swan charged on the breast with a flax flower proper.
Motto: 'FALCE MARIQUE POTENS' - Powerful With the Sickle and on the Sea

The lower part of the shield shows a ship in sail on water. This was the unofficial device of the town before the official grant of arms. The chief is charged with a representation of the Castle of Olderfleet. The shuttles are for the linen industry.

The crest shows an arm grasping a corran or ancient Irish sickle. This is a punning reference to the Curran Ward area of Larne. The supporters are swans standing for Swan's Island and also derive from the supporters of the Marquess of Ailsa. They are charged with flax flowers for heraldic difference.