From Heraldry of the World
Your site history : Leinsweiler
Jump to navigation Jump to search 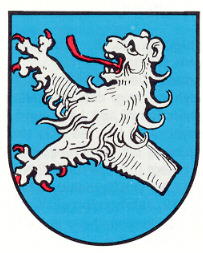 The meaning of the lion is not known, it may simply be the lion of the Pfalz region. The demi-lion first appeared on the old seal of the village, dating from around 1500. The seal was used until the end of the 18th century, when a new seal was made with 'Figure of Freedom', a typical symbol for the time.

In the first decade of the 19th century the village became part of Bavaria and the council asked the King for arms with a complete lion. However, the State Heralds proposed to continue the use of the old arms. It took until 1844 before the council agreed to the old arms in the colours of Bavaria, as no historical colours were known.