From Heraldry of the World
Your site history : Lengde
Jump to navigation Jump to search 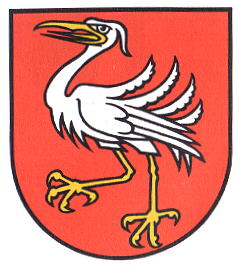 The arms were officially granted on November 3, 1965.

The arms are based on the seal of the oldest known lord of the village, Ludolf von Lengde from 1309. The bird on the seal is not recognisable, but in 1965 it was decided to use a heron, the largest bird in the municipality. The bird also represents the nature in the area. The heron is shown in an aggressive state, symbolising the nature protection activities in the region.