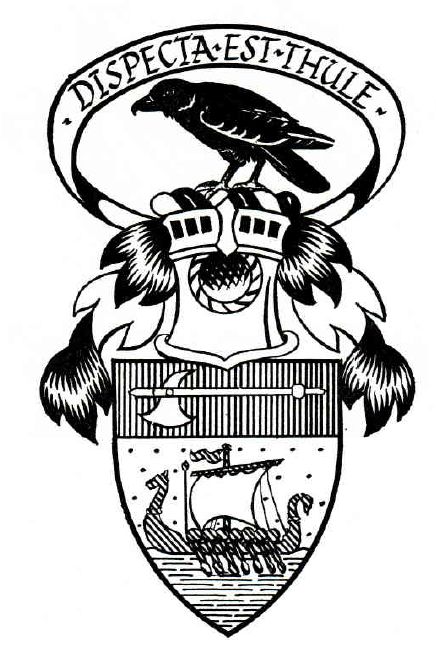 (A coloured inmage of these arms is welcome !)

Or, in the sea Proper, a dragon ship Vert under sail, oars in action; on a chief Gules, a battle-axe fessways Argent.
Above the Shield is placed a suitable Helmet with a Mantling Gules doubled Argent, and on a Wreath of their proper Liveries is set for Crest a raven Proper, and in an Escrol over the same this Motto "Dispecta est Thule".

The Viking warship at sea recalls the old link with the Nordic countries and Lerwick's reliance on the sea. The battle-axe in the chief is a symbol for the Norse warriors. The crest shows a raven, which is an important bird in Norse mythology. Ravens were the companions of Odin and ravens were also used to determine in which direction the land was when the Vikings made long journeys. Lerwick is the northernmost Burgh in the United Kingdom, which is reflected in the motto from Tacitus : "Dispecta est Thule" (Thule is seen through the gloom or Thule was sighted), Thule being the mysterious island at the top of the world. 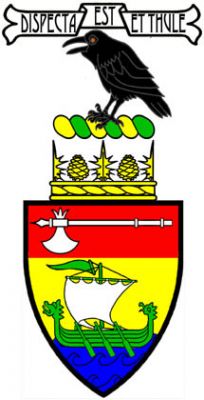 Or, in the sea Proper a dragon ship oars in action Vert under sail Argent, on a chief Gules a battle-axe fessways Argent.

Above the Shield is placed a Coronet appropriate to a statutory Community Council, videlicet:- a circlet richly chased from which are issuant four thistle leaves (one and two-halves visible) and four pine cones (two visible) Or, and on a wreath of the colours is set for Crest a raven Proper, and in an Escrol over the same this Motto "Dispecta Est Et Thule".

The arms are basically the same as the old burgh arms, only the helmet has been replaced by a crown, common to community councils.