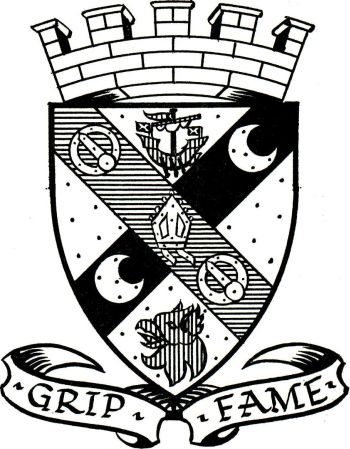 Or, a bend sinister Sable, charged with two crescents of the First, surmounted of a bend dexter Azure, charged with a mitre in pale betwixt two buckles also of the First; in chief a lymphad Gules, sails furled Argent, oars in action Sable, flagged of Scotland, viz.: Azure, a saltire Argent, and in base, a griffin's head erased Gules.

Below the Shield which is ensigned of a Burghal coronet is placed in an Escrol this Motto "Grip Fame".

Leven was created a Burgh of Barony in 1609 by George Gladstanes, Archbishop of St. Andrews, in favour of George Lauder of Bass.

The arms retain the saltire pattern of the device on the old Burgh seal which was designed by a local clergyman, the Rev. A. T. Grant.

The gold field and black bend sinister recall the family of Christie of Durie and the golden crescents thereon Durie of that Ilk; both these families have a long association with the town.

The blue bend dexter with its golden buckles comes from the Leslie arms and refers to the Burgh's connection with that family and in particular with Alexander Leslie, the famous Covenanting General, who was created Earl of Leven in 1641.

The mitre is for the archi-episcopal founder of the Burgh, the red griffin's head for Lauder of Bass, and the galley for Leven's importance as a seaport.

The motto is a variant of the Leslie "Grip Fast".