From Heraldry of the World
Your site history : Leigh > Leighton-Linslade > Leominster > Letchworth Garden > Leyland
Jump to navigation Jump to search 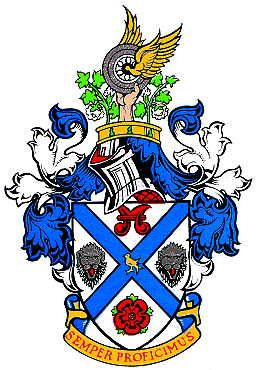 Arms : Argent on a Saltire Azure between in chief a Water Bouget Gules in fess two Leopard's Faces Sable and in base a Rose Gules barbed and seeded proper a Martlet Or.
Crest : Issuant from a Circlet Or charged with three Gouttées Vert a Cubit Arm holding a Motor Wheel proper winged Or between two Sprigs of Cotton proper; Mantled Azure doubled Argent.
Motto: 'SEMPER PROFICIMUS' - We progress continually

The arms were officially granted on November 10, 1950.

The St. Andrew's cross of blue on a white ground indicates the dedication of the Parish Church. This cross, borne black on white, was also the arms of the Baldwin family and the golden martlet is from the arms of the Fleetwood family. Both these families have held the living of Leyland for generations. The water bouget or ancient water skin is from the arms of the Bussels, Barons of Penwortham, who held the manor of Leyland. From them it eventually descended to the Faringtons, from whose arms are taken the black lions' faces. At the base is the familiar rose of Lancaster, signifying a Lancashire Town.

The white and blue of the wreath and mantling are the colours of St. Andrew and of the Duchy of Lancaster. The three green drops represent drops of oil, these refer to the paint and varnish industry. The hand, winged motor wheel and cotton plants refer to historic and modern industrial activities. The tyre of the wheel being also allusive to local rubber works.