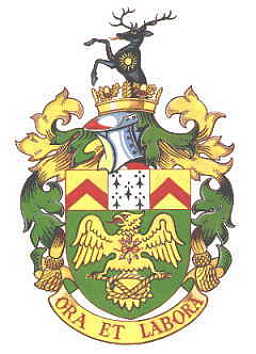 Arms : Vert an eagle displayed wings inverted perched on a Stafford knot Or and charged on the breast with three arrows barbs downwards two in saltire and one in pale proper banded gules on a chief Or a pale ermine between two chevrons gules.
Crest : Out of a coronet composed of four ears of wheat and as many acorns leaved set alternately upon a rim Or, a demi stag sable charged on the shoulder with a sun in splendour gold, mantled vert doubled Or.
Motto: 'ORA ET LABORA'-Pray and work

The gold Stafford knot on a green background represents rural Staffordshire. The Roman eagle, also in gold, refers to the important Roman historical associations of the district (e.g. Watling Street, Ryknild Street and Letocetum, which gave its name to Lichfield). The eagle is also common to the arms of the Paget and Biddulph families, and was also the emblem of Leofric, Earl of Mercia, who died at Kings Bromley in 1057.

The special coronet of ears of wheat and acorns is of a type formerly assigned to Rural District Councils. The black stag alludes to the coalfields in the Cannock Chase area. On its shoulder is the sun, which, as the source of light and power, is common to the arms of the National Coal Board and the Central Electricity Generating Authority. 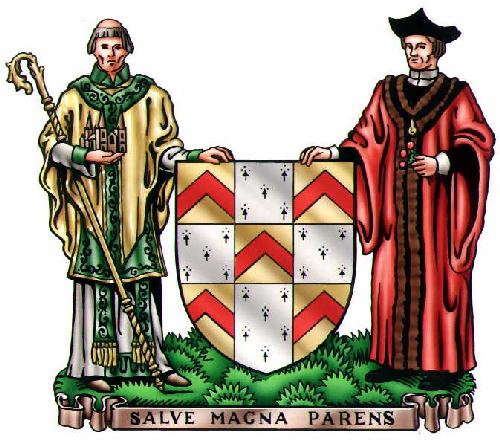 The chevrons probably derive from the Arms of the ancient family of Stafford.

The supporters are a Bishop, fully-robed, holding a Pastoral staff, and the Cathedral represented, which symbolises Saint Chad, the first Bishop of Lichfield, and a representation of a Guild Master, robed in 15th century dress and holding in one hand, a posy of roses.

The motto, "SALVE, MAGNA PARENS" = "HAIL GREAT MOTHER", was first used by Samuel Johnson at the beginning of the compilation of his famous Dictionary. It was a tribute by Johnson, not only to his beloved native city, but also to Lichfield as the Mother City of the Kingdom of Mercia.