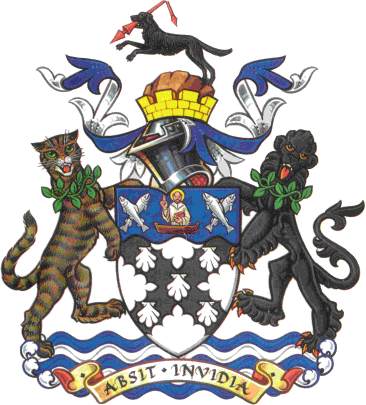 The arms were officially granted on March 1, 1989.

The lower half of the shield uses the former coat of arms of the old Limavady district council. It shows two crossed bands with shells. This is taken from the coat of arms of the Connolly family who owned all the land around Limavady from 1697. The upper part of the shield is a wavy blue chief. This is taken from the Phillips coat of arms. The Phillips owned all the land around Limavady until they sold it to the Connolly clan. The blue wavy chief also resembles the Arms of the Haberdashers' company, who owned land around Ballykelly. On the chief are two sets of crossed fish, which were taken from the Arms of the O'Cahan family and the Fishmongers' Company. Between the fish sits St. Columba in his boat. He came to visit the Convention of Drumceatt in 575, just outside the town travelling up the river Roe.

The crest shows a mural crown, denoting the Borough status of the council. Inside this is a rock from which an Irish wolfhound leaps. The town's name means leap of the hound. The dog is carrying a broken lance from the Crest of the Phillips family.

The supporters are from the Phillips and O'Cahan Arms. On the dexter is a cat-a-mountain (O'Cahan) and on the sinister a black lion (Phillips).

The motto is: ABSIT INVIDIA which means "Let there be no ill-will".