From Heraldry of the World
Your site history : Lincolnshire
Jump to navigation Jump to search 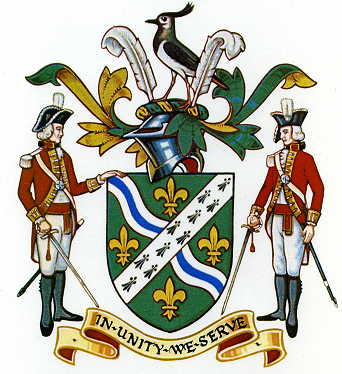 Arms : Vert a Bend wavy Argent charged with a like Bendlet Azure overall a Bend sinister Ermine between four Fleurs-de-Lys Or.
Crest : On a Wreath Or and Vert a Lapwing proper between two Ostrich Feathers Argent.
Supporters : On either side an Officer of the 10th Foot (Lincolnshire "Yellowbellies") circa 1795 holding in his dexter hand a drawn Sword point downwards all proper.
Motto: 'IN UNITY WE SERVE'

The arms were officially granted on April 8, 1977.