From Heraldry of the World
Your site history : Lincolnshire - Parts of Kesteven
Jump to navigation Jump to search 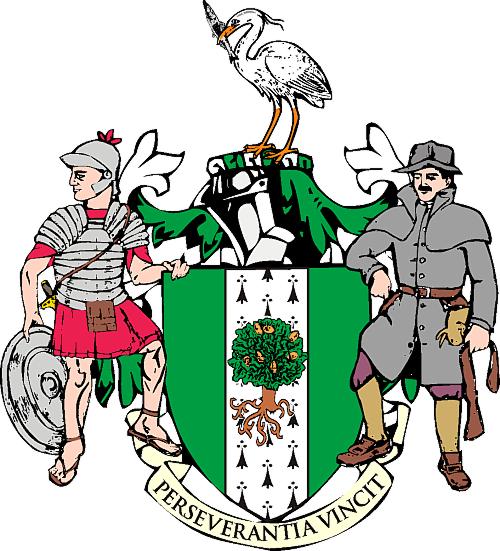 Arms : Vert on a Pale Ermine an Oak Tree eradicated proper.
Crest : On a Wreath Argent and Vert a Heron in the beak a Pike proper.
Supporters : On the dexter side a Roman Legionary and on the sinister side a Lincolnshire Poacher of the early nineteenth century both proper.
Motto: 'PERSEVERANTIA VINCIT' - Perseverance succeeds.

The arms were officially granted in 1950.

The green shield bears an ermine pale, representing the Roman Ermine Street which runs the length of Kesteven. This charged with an oak tree for the ancient forests of the County.

The crest shows a Heron with a pike in its beak, for the area's varied wildlife.