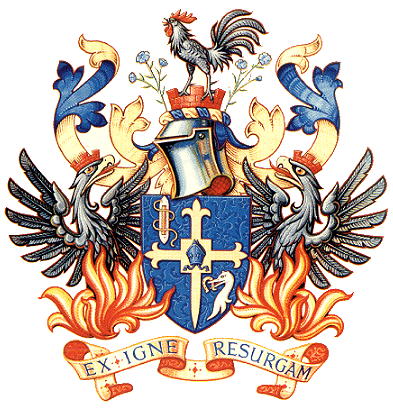 Arms : Azure, on a cross flory fitchy quadrate Or a mitte azure between in dexter chief a weaver's s huttle argent threaded Or, and, in the sinister base an ostrich's head erased argent, in the beak a horseshoe Or.
Crest : On a wreath of the colours, A mural crown gules, between two sprigs of flax flowered proper, perched on the battlements a gamecock sable, combed and wattled gules.
Supporters : On either side a phoenix sable, beaked Or, enflamed proper, and murally crowned gules.
Motto: Ex igne resurgam

The arms were officially granted on November 15, 1966.

The lily cross symbolises the French Huguenots and the historic connection between the Huguenots and Lisburn. The fleur-de-lis, lily, is the symbol of France. The mitre is a symbol for the cathedral that existed in Lisburn for over 300 years. The shuttle and the thread of flax are symbols for the linen industry. The ostrich head with the horseshoe on its beak are taken from the arms of Sir Richard Wallace.

The gamecock on the crest is a canting reference to the old name of the town, Lisnagarvey, or the fort of gamesters.

The supporters are two phoenix rising from the flames and refer to the fact that the town was burned down and rebuilt twice in its early days. The motto "I will arise out of fire" refers to the same facts.