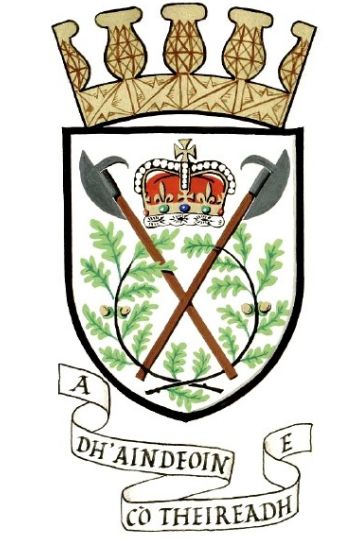 Argent, two Lochaber axes, heads upwards and blades out­ wards, saltirewise, intertwined with a chaplet of oak; in chief an imperial crown, all Proper.

Above the Shield is placed a coronet appropriate to a statutory District, videlicet:- a circlet richly chased, from which are issuant eight thistle-heads (three and two halves visible) Or; and in an Escrol under the Shield this Motto "A D'h Aindeoin Co Theireadh E.

The arms are based on the arms of the Burgh of Fort William. The two Lochaber axes are typical for the district and recall the Battle of Inverlochy in 1645 between the Marquess of Montrose and the Campbells. The oak brnaches are taken from the badge of the Clan cameron, the main family in the area.

The motto "A D'h Aindeoin Co Theireadt E" means "Gainsay it who dare", and is taken from the clan Macdonald of Clanranald.