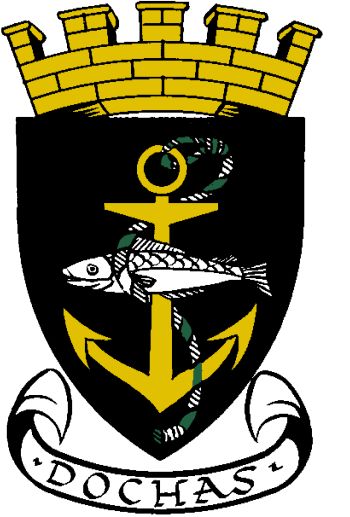 Sable, an anchor paleways Or, surmounted of a herring fess­ ways Argent, and having a rope reflexed around it Vert and of the Third.

Below the Shield, which is surmounted of a coronet appro­priate to a Burgh, is placed in an Escrol this Motto "Dochas".

Lochgilphead developed as a fishing village and became a Police Burgh in 1858.

The arms follow closely the device on the Burgh seal. The field has been made black and the anchor gold as these are the livery colours of the Duke of Argyll, the principal landowner in the area. The green and silver of the rope refer to the sea and to Loch Gilp on which the town stands. The whole symbolises the Burgh's close connection with the fishing industry.

The Gaelic motto means "Hope" and comes from the seal.