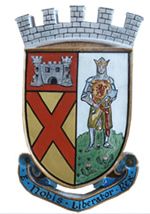 Parted per pale Or and Argent: on the dexter a saltire and chief Gules, the latter charged with a ruined castle of the Second, masoned Sable; on the sinister, on a mount Vert, the figure of King Robert the Bruce Proper.

Above the Shield is placed a mural coronet and in an Escrol under the same this Motto "E Nobis Liberator Rex".

The arms were officially granted on March 9, 1939.

Lochmaben, was mentioned in 1296 as a Burgh of the Bruce Lords of Annandale.

The arms illustrate the very close connection of the Bruce Lords of Annandale and King Robert I with Lochmaben. This connection began in 1124 when King David I made a grant of all Annandale to Robert de Brus, a Norman Knight who already held lands in Yorkshire. The Bruces built a castle at Lochmaben on a hillock between Kirk Loch and Castle Loch and there is a tradition that King Robert I made Lochmaben a Royal Burgh.

On the dexter side are shown the arms of the Bruce Lords of Annandale with their Castle of Lochmaben added in the chief; on the sinister is King Robert I in full armour, the details being copied from his statue at Lochmaben.

The Latin motto "From us is sprung a liberator King" is another proud reference to King Robert I.