From Heraldry of the World
Your site history : Lochtum
Jump to navigation Jump to search 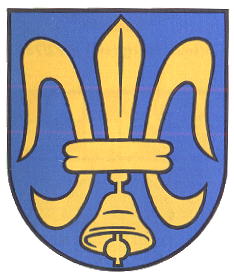 The arms were officially granted on August 6, 1965.

The arms show a unique symbol, a combination of a bell and a fleur-de-lis. The fleur-de-lis is derived from the arms of the seal of Heinrich von Lochtum on a document from 1397. The fleur-de-lis thus stands for the oldest known Lords of the village.

As a fleur-de-lis is not a very distinguishable symbol, the small bell was added. The bell represents the bell of the chapel of the estate of Adalbert I, Archbishop of Bremen in the village. Adalbert took refuge here in 1066. The chapel was destroyed in the 1930s, and the bell is one of the few remaining items from the chapel.