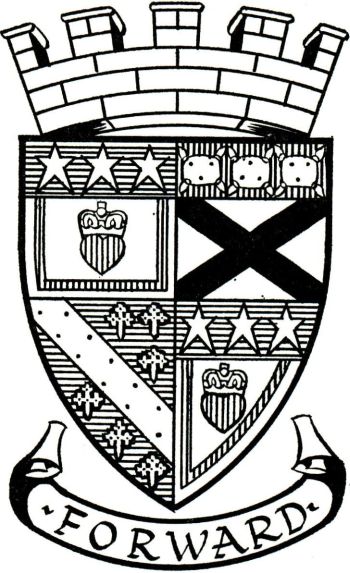 Quarterly: 1st and 4th, Argent, within an orle a man's heart Gules, imperially crowned Proper; on a chief Azure, three mullets of the field; 2nd, Argent, a saltire Sable, on a chief Gules three cushions Or; 3rd, Azure, a bend between six cross-crosslets fitchee Or.

Above the Shield is placed a Burghal coronet and in an Escrol below the Shield this Motto "Forward".

Lockerbie developed around the square tower of the Johnstones of Lockerbie and became a Police Burgh in 1863.

The arms are taken very much from the device on the seal adopted by the Burgh in 1892. This seal showed the arms of Mr. Arthur Henry Johnstone-Douglas of Lockerbie, whose family had owned the estate of Lockerbie since the sixteenth century and who, himself, suggested that the Burgh should incorporate his arms in its seal.