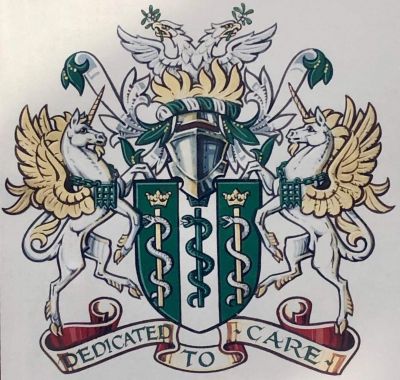 The green and silver represent the colours attributed to the ambulance services of the United Kingdom. The silver pale represents the River Thames which bisects the London Ambulance Service National Health Service Trust.

Each section of the shield depicts a Rod of Aesculapius which has long been associated with medicine and can also be found on the Service’s Crown Badge. Above each Rod of Aesculapius is a coronet which depicts the services lineage as a Crown Service.

Above the shield sits the Helm, crowned with a crest of a double headed phoenix rising from the flames and the ashes. This symbolises the rebirth of the service as part of the National Health Service. The phoenix is double headed to show the service is always vigilant as an emergency service and mistletoe, a medieval sign of medicinal remedy, is held within the beak of the phoenix.

The arms are supported by two winged unicorns. In ancient times the horn of the unicorn was believed to have special healing properties and the Unicorns are winged to signify that patients can expect a speedy response to their care needs. Around the neck of each unicorn is a chain from which hangs a portcullis. The portcullis is a symbol of security and protection.

All of this symbolism combined describes the service as one of vigilance and medicinal healing with a speed of response and Dedicated to Care which is the motto of the service. 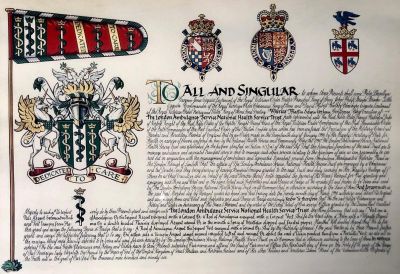