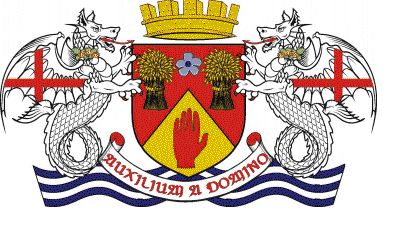 Arms: Per chevron gules and Or, in chief a flax flower proper between two garbs of the second, in base a dexter hand appaumee couped at the wrist of the first; the shield ensigned with a mural crown gold.
Supporters: On either side a sea dragon argent, each charged on the wing with a cross gules and wreathed about the neck with a garland of oak stalked and leaved and fructed proper.
Motto: Auxilium a Domino.

The arms were officially granted on February 1, 1951.

The flower is representative of the many flax fields found throughout the area and the sheaves allude to the plentifulness of the County's land. The red hand of Ulster, indicates that the county is part of Ulster and Northern Ireland and the mural crown is a common symbol of civic government.

The dragons with red crosses on the wings are derived from the supporters of the City of London. These have been difference by adding fish-tails for the County's maritime interests. The wreaths of oak, refers to the derivation of the place name Derry, an anglicisation of the old Irish Daire (Modern Irish Doire), meaning "oak-grove" or "oak-wood".