From Heraldry of the World
Your site history : Lorch (Württemberg)
Jump to navigation Jump to search 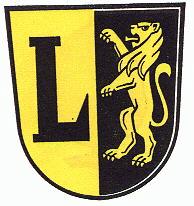 The arms were granted in 1934, previously the city used only the letter L in the colours of Württemberg. The lion was added as a symbol for the Staufen dynasty. The area was until the 15th century ruled by the (Hohen)Staufen family.