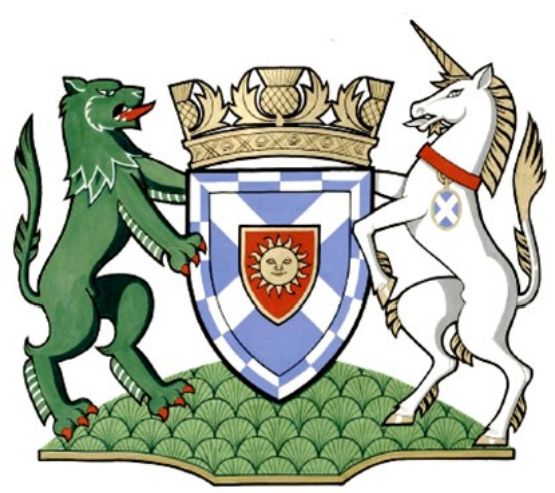 Azure, a saltire Argent, surmounted at the fess point by an inescutcheon Gules, fimbriated Or, and charged with a sun in splendour Or, a bordure counter-compony of the First and Second.

Above the Shield is placed a coronet appropriate to a statutory Region, videlicet:- a circlet richly chased, from which are issuant four thistles leaved (one and two halves visible) Or; and on a Compartment below the Shield are set for Supporters, dexter, a lion rampant Vert, armed and langued Gules, and sinister, a unicorn Argent, armed, maned and unguled Or, and gorged with a collar Gules, from which is pendant an oval badge Azure, fimbriated Or, charged with a saltire Argent.

The arms shows a St. Andrew's cross for Scotland within a bordure and a red esutcheon. The sun on the escutcheon is the ancient symbol of the Earldom of Lothian. The supporters are the unicorn common to all Regional Councils, and a green lion, taken from the arms of Midlothian County Council. The Lothian Region was divided into four districts : East Lothian, Midlothian, West Lothian, Edinburgh city