The history of the arms of the town is rather complicated. The historical arms of the town show an arm coming from a cloud and holding a grill; the symbol of St. Lawrence, the local patron saint, after whom the town is named. These arms are known from a seal from 1791, but may have been in use for a longer time.

In 1999 the town decided on the use of the town symbols. One of the proposals showed a green hill with pine trees, with in front a lake and a water-mill. Above the pine trees the grill was placed. 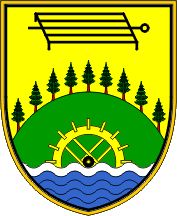