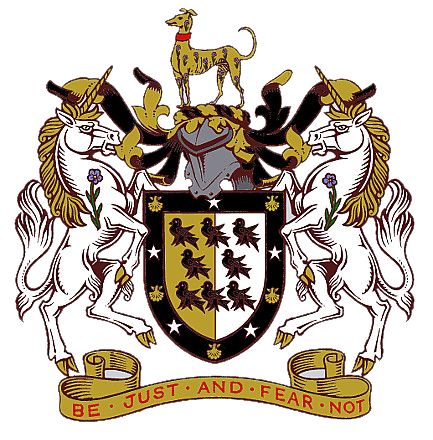 Arms : per pale Or and argent, eight martlets, three, to, tree sable; a bordure charged with five escallops of the first and as many mullets of the second alterately.
Crest : A greyhound statant Or semée of flax flowers stalked and leaved proper, and collared gules.
Supporters : On either side a unicorn argent charged on the shoulder with a stalk of flax flowered and leaved proper.
Motto: Be just and fear not

The arms were officially granted on December 7, 1951.

The division of the shield into gold and silver, the black martlets, the silver mullets and gold scallops are all taken from the arms of the Brownlow family, Barons of Lurgan.

The greyhound, with the colours of the hound and collar reversed, come from the crest of the Brownlows. It can also be seen as representing Master McGrath, a famous greyhound and winner of the Waterloo Cup on three occasions, and was the first greyhound to do so. He became such a celebrity that his owner, the 2nd Baron Lurgan, was asked to take him to be seen by Queen Victoria.

The flax sprigs are for difference and refer to the locally important industry.

Before the town used the non official arms shown below on the postcard.

These arms were designed in 1868 when the Town Commissioners did Lord Lurgan the honour (?) of appropriating his arms and quarterings (with his crest) and impale them with some design of their own invention (meaning unknown).