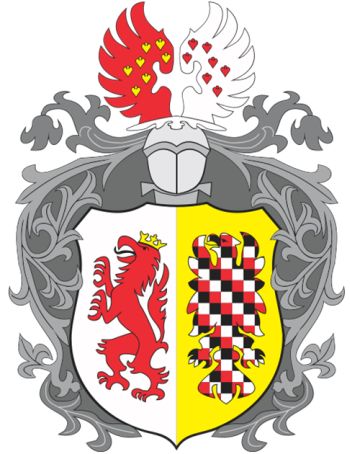 The arms of the city show a city gate with a golden lion. The lion (Lwow, German: Löwe, the old name was Löwenberg) is a canting element. These arms are based on the oldest seal of the city (known since 1341). On February 14, 1501 King Wladislaw of Bohemia granted new arms to the city, which were confirmed by Emperor Maximilian I 12 days later. These arms show a red double-tailed lion and a chequered eagle, see image below. The lion is the lion of Bohemia, the eagle the arms of Moravia, but both are presented in wrong colours (see the Czech National Arms). These arms were still in the first half of the 20th century , but were later replaced by the arms above.