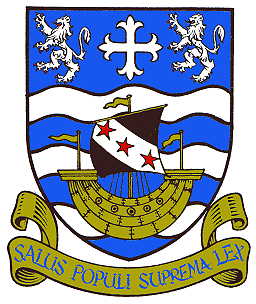 Arms : Barry wavy of six Argent and Azure a Lymphad Or the sail Sable thereon a Bend of the first charged with three Mullets Gules on a Chief wavy of the second a Cross flory between two Lions rampant Argent.
Motto: 'SALUS POPULI SUPREMA LEX' - The welfare of the people is the highest law

The arms were officially granted on November 9, 1922.

The cross and the lions are from the arms of the Dean and Chapter of Durham, the See having owned the Benedictine Priory founded at Lytham by Roger FitzRoger in the reign of Richard I.

The waves represent the sea and the ship is from the device of the former St Annes-on-Sea UDC. The arms on the sail are those of the Clifton family of Lytham Hall.