From Heraldry of the World
Your site history : Möhringen (Stuttgart)
Jump to navigation Jump to search 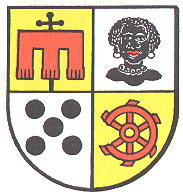 The arms are made up from arms on a stonewall in the Hospital of Esslingen, to which the village belonged. The arms first appear in the early 20th century on the seals of the village, with St. Catherine as a supporter. St. Catherine is the patron saint of the hospital. The first quarter of the arms is likely taken from the arms of Tübingen, as the villages Möhringen and Vaihingen were possessions of the Counts of Tübingen. They sold the villages in the 13th century to the hospital. The head in the second quarter is added as a canting symbol (Möhrin=female Moor). The origin of the balls in the third quarter is not known. They appear in many arms of the hospital. The fourth quarter also shows a broken wheel, one of the symbols of St. Catherine.

The arms were first used in 1904 with the balls in the third field black on a silver field. In 1933 the arms were changed into the above colours. At the same time the supporter was slightly changed.