From Heraldry of the World
Your site history : Müllheim (Baden)
Jump to navigation Jump to search 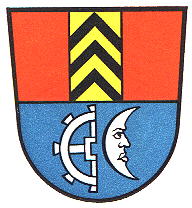 Müllheim was first mentioned in 758. In 1444 it became a possession of the Margraves of Hachberg-Sausenberg and in 1503 to the Counts of Baden. In 1810 it became a city, but before that time it was already a fairly important town.

The arms show in the upper part the arms of the Lords of Badenweiler, whose capital it had become in 1727. The lower part shows the older village signs. The wheel is a canting symbol (Mühle=mill), whereas the origin or meaning of the crescent is unknown.

The wheel and crescent are known since 1691, when they are cast in a church bell made in Basel. It has an inscription saying 'The village arms', leaving no doubt. The only difference with the present lower part of the arms is that the crescent is below the wheel. Until 1788 the arms remain unchanged, but on newer seals and images the arms were combined with the arms of Badenweiler. At first the position of the crescent and wheel was reversed. Since around 1850 the arms have not changed.