From Heraldry of the World
Your site history : Münchweiler am Klingbach
Jump to navigation Jump to search 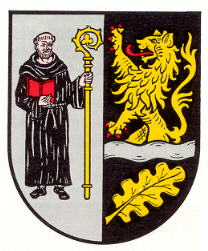 The monk is a canting symbol (Mönch is monk) and also refers to the Klingenmünster Abbey, to which the area belonged in medieval times. Later the village was a possession of the Dukes of the Pfalz-Zweibrücken, which is shown by the lion of the Pfalz. The lower part of the left half shows a canting wavy bar for the Klingenbach (Bach is stream, brook) and an oak leaf symbolizing the forests in the municipality.