From Heraldry of the World
Your site history : Mablethorpe and Sutton
Jump to navigation Jump to search 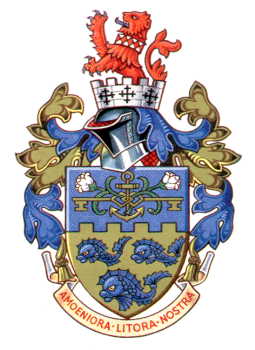 Arms : Per fesse embattled Azure and Or in chief two White Lilies slipped and leaved proper the stalks conjoined and entwined with the shank of an Anchor interlaced with the bows of two Keys fessewise wards outwards and downwards Gold and in base three Dolphins naiant of the first.
Crest : Out of a Mural Crown Argent charged with three Cross Crosslets Sable a demi Lion Gules gorged with a Collar Lozengy of the first and last. Mantled Azure doubled Or.
Motto: 'AMOENIORA LITORA NOSTRA' - Our shores are more delightful

The arms were officially granted on February 10, 1960.

The background colours are appropriate to a seaside resort - blue for the sea and gold for the sands. The embattled line suggests the great sea wall built after the flood disaster of 1953. The top of the shield shows the emblems of three patron saints - lilies for St. Mary the Virgin, keys for St. Peter and an anchor for St. Clement. They are interlaced to represent the union of the parishes of Mablethorpe, Trusthorpe and Sutton-on-Sea. The three dolphins suggest the pleasures of the three resorts

The crest represents the early manorial history of the district. The mural crown is a common civic emblem and bears the crosslets from the arms of the de Mablethorpe family. The red lion is that of the de Montalts, and his collar bears the lozenge pattern of the Fitzwilliams.

The motto is based on a quotation from Tacitus.

The arms are currently used by the town council.