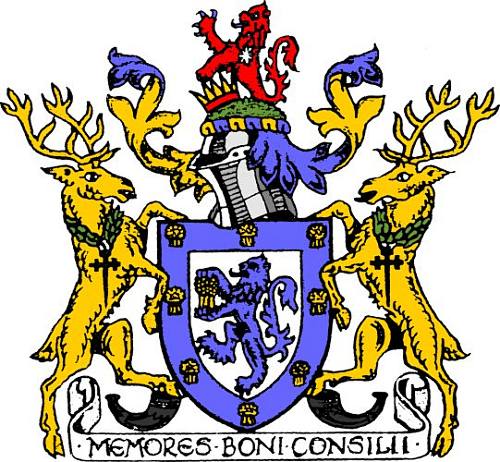 Arms: Argent a Lion rampant Azure holding between the forepaws a Garb Or all within a Bordure Azure charged with eight Garbs Or.
Crest: On a Wreath Or and Azure a Mount Vert issuant therefrom a demi Lion Gules charged on the shoulder with an Estolie Argent and supporting with the forepaw an Antique Crown Or the Rim Gules .
Supporters: On either side a Stag Or each gorged with a Garland of Laurel proper pendent therefrom a Cross crosslet fitchy Sable.
Motto: 'MEMORES BONI CONSILII' - Mindful of our worthy purpose.

The arms were officially granted in 1974 and replaced the previous arms from 1960 (see below).

In the new arms the lion and garb remained, but a blue bordure with eight gold garbs, representing the eight old Cheshire councils merged in the new borough was added.

The crest represents the Knutsford-Bucklow-Wilmslow area. The grassy mound represents Bucklow Hill, which gave its name to an ancient hundred and modern Rural District. The red lion represents the Egertons of Tatton, who held the hundred's Court Leet. This lion appeared in Knutsford's crest. Red lions also occur in the arms of the local Legh, Mallory and Leigh families.
The antique crown occurred in the crests of both Knutsford (coloured gold) and Wilmslow (coloured red). In Knutsford's case it referred to King Cnut, in Wilmslow's to the Greg family. In the new crest the crown has a red circlet and gold points. The crest is completed by the white estoile of the Honford family.

The supporters are for the Macclesfield Forest area, which included the towns of Alderley Edge, Bollington and Disley. They are gold stags, from the arms of the Stanley Earls of Derby, Master Foresters and Hereditary Stewards of the Liberty and Hundred of Macclesfield. Stags also occur in the arms of other local families - the Stopfords, Downs and Shrigley families.
Around their necks are garlands of laurel, from the seal of Bollington UDC. From this hangs a black cross-crosslet of the Davenport family, who held the Master Forestership in Norman times. The stags are each standing on a black hunting horn. These occurred in the Sherd and Sutton family arms, who held land in the forest. 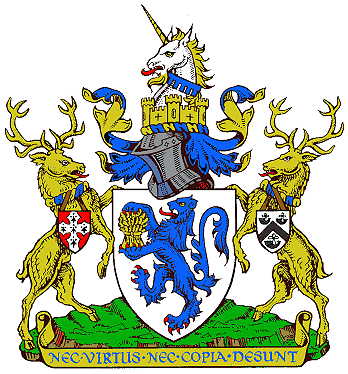 These arms were blazoned as follows:
Arms: Argent a Lion rampant Azure holding between the forepaws a Garb of Wheat proper.
Crest: On a Wreath Or and Azure out of a Circlet composed of four Towers conjoined with a Castle Wall Gold a Unicorn's Head Argent armed and crined of the first and gorged with a Label of five points Azure.
Supporters: On each side a Stag Or gorged with a Wreath Gold and Azure pendent therefrom by a Guige proper an Escutcheon that on the dexter Gules a Cross engrailed Ermine that on the sinister Argent a Chevron between three Bugle Horns stringed Sable.
Motto: 'NEC VIRTUS NEC COPIA DESUNT' - Neither virtue nor plenty are lacking.

Before 1960 the town had no arms, but the lion and garb have been used for a a much longer period of time.