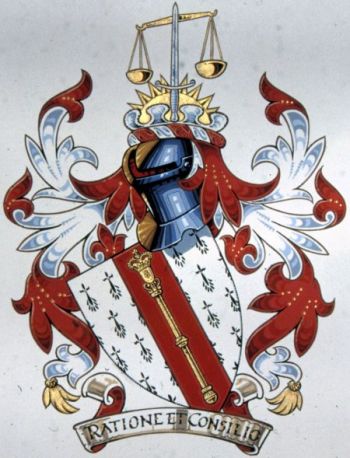 Arms : Ermine, on a pale gules a mace Or.
Crest: On a wreath ermine and gules, Issuant from clouds proper and in front of a sun rising Or, a sword, point upwards, proper, suspended from the reverse of the blade a pair of scales gold. Mantled gules, doubled argent.
Motto: Ratione et consilio

The background to the shield is ermine, representing the robes of the Lord Chancellor, symbolic of civic duty and authority. The broad band of red is symbolic of eagerness to serve. Both are the colours of Plantagenet, being the royal livery colours of Edward III as in England and Wales, Justices of the Peace were first appointed in 1361 AD by King Edward III.

The sunburst is the badge of Edward III, who first established the office of the magistracy to administer the law. The sword is connected with St. Paul, the City of London and justice. The scales of justice swing freely, indicating freedom from any executive interference.

The angle of the shield indicates the willingness of the Knight in tournament to ‘tilt’ in the joust. Such a tilted shield displayed outside a knight’s encampment in tournament indicated they would do battle with anyone and all comers.

Literature : Leaflet from the association, provided by D. Goble, 2022.