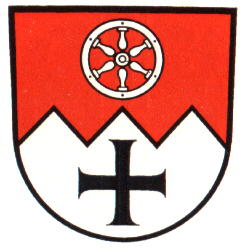 The arms are a combination of the wheel of the State of Mainz and the points of the arms of Franken. Historically the district was ruled for the largest part by the bishops of Würzburg, and the points of Franken symbolise the diocese. The other, smaller, parts of the district were ruled by the bishops of Mainz and the Teutonic Order. The cross is the cross of the Order.