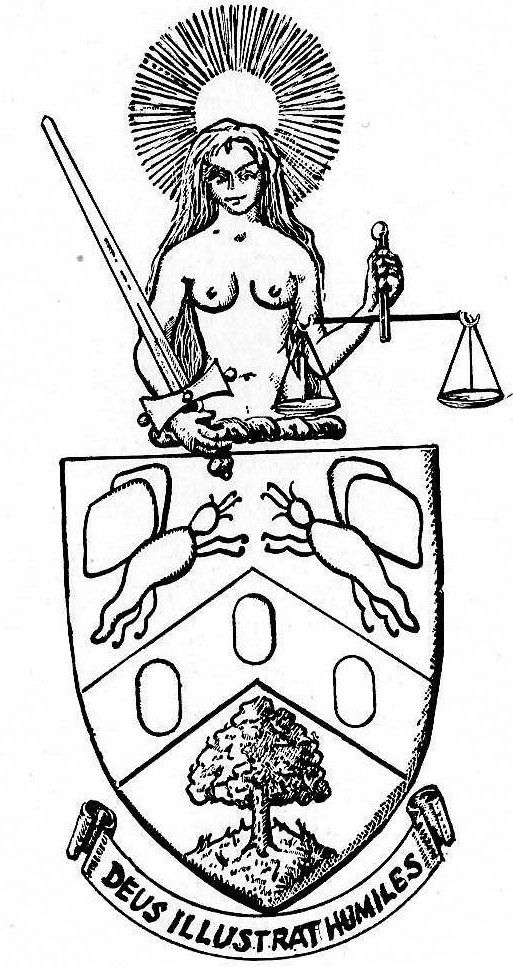 Argent on a Chevron Azure between two Butterflies countervolant in Chief Sable and a Mulberry Tree proper on a Mount in base Vert both charged with several Silkworms or three Cocoons or Silkworms Eggs of the last: and for the Crest, On a Wreath Argent and Azure a Justice proper Crined Or, about the head a Glory, in the Right hand a sword hilt and pomel gold, blade proper, in the left a pair of Scales Or: underneath on an Escroll this Motto, Deus illustrat humiles.

The grant is particularly interesting for the arms were granted " to be used for sealing commodities made or to be made pursuant of the said Letters Patent (i.e. those of 1688) and during the continuance thereof." So runs the Earl Marshal's Warrant, and the Grant, as is proper, echoes it. No other reason for the grant is given; there is no mention of using the arms on seals, shields or otherwise, they are solely for sealing commodities. This grant of arms would, therefore, seem to be little more than a grant of an armorial trade mark.

Alamode was a light, glossy black silk first used in England in 1676, doubtless so named because at one time it was à la mode. Renforce or renforcée was a strong silk known to have been in use in 1688. Lutestrings was a glossy silk fabric in use by 1661; it was also used to describe a whole dress, or ribbons, made from this material.

Peter de Clux, William Sherard and Paul Clowdesley, three enterprising gentlemen of the City of London, obtained a Patent under the Great Seal of England, bearing date the 23rd. day of November 1688, empowering them to make and dress Alamodes, Renforce and Lutestrings. Three and a half years later they were granted arms.