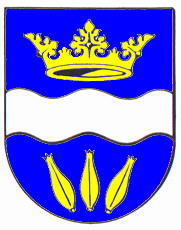 The arms were devised in 1939 and show a crown and wavy bar for the Kongeå (King's river), a small river on the southern border of the municipality. The three barley kernels in the lower part are also canting, malt, used in beer brewing, is made from barley. The kernels are taken from the old seal of the area, dating from 1535.