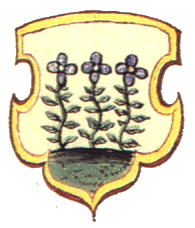 The arms show the Indian Maddar plant, which was used to produce a bright red dye, an important export product in the 18th century. Mannar was known for its red textiles.

The above image dates from a manuscript dating from 1717/1720. The town currently does not use arms.