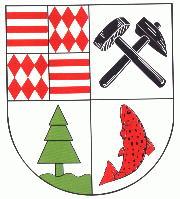 The miner's tools and the fish are taken from the arms of the Mansfelder Seekreis and symbolise the mining and the iron works.

The fish represents the lakes and brooks, the tree the many woods in the county.