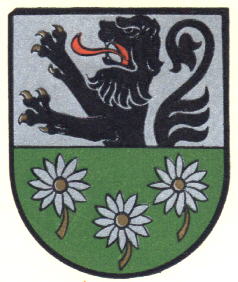 The village of Marienfeld developed around the monastery Marienfeld, which was founded in 1185 by Lord Widukind von Rheda. The upper half of the arms thus shows the black lion of the Von Rheda family. The lower half shows three Marienblumen (or Gänseblümchen, daisies) as a canting symbol.