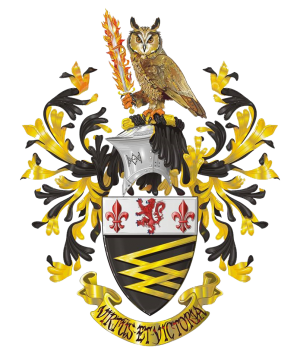 Arms: Sable three chevronels issuing from sinister braced Or, on a chief Argent a lion rampant between two fleurs-de-lis Gules.

Crest: On a wreath of the colours a long-eared owl close guardant grasping in its dexter talons a sword enflamed proper.

The gold chevronels on the black shield are emblematic of the armiger's 22 year career as a retired non-commissioned officer in the US Army. The fleurs-de-lis are a nod to the armiger's maternal name of Lilly who as Huguenots fled France for County Antrim, Northern Ireland and years later sailed to South Carolina in 1798. The lion rampant is a nod to his Scottish paternal name of Henderson whose ancestor arrived in Virginia during the 17th Century. The silver chief symbolizes the peace and sincerity of his family. The red represents the fortitude and blood of his family.

The Owl symbolizes the wise but vigilant warrior. It represents the armiger's academic achievements and his status in the airborne infantry as well as his love of aviation. The flaming sword symbolizes his first combat experience as a squad leader with the 504 Parachute Infantry Regiment.