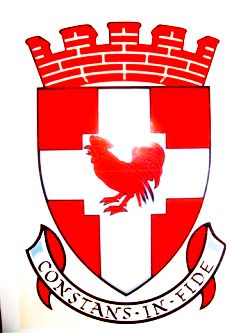 Gules, on a cross nowy-quadrat Argent a cock of the First. Above the Shield is placed a coronet appropriate to a Burgh of Barony (videlicet: Gules masoned Argent) and in an Escrol below the same this Motto "Constans In Fide".

Markinch was created a Burgh of Barony in favour of James Law of Brunton in 1673.

The arms show a cross nowy quadrat in allusion to the ancient parish church, a representation of which appeared on the 1892 Burgh Seal and whose Norman tower is one of the finest in Scotland; as the church was dedicated in 1243 to St. John the Baptist, silver and red colours have been used.

The cock, also coloured red, comes from the arms of Law of Brunton.

The Latin motto "Constant in the Faith" has been used for many years by the Burgh; it is obviously a reference to the long history of the parish church.