From Heraldry of the World
Your site history : Maryborough
Jump to navigation Jump to search 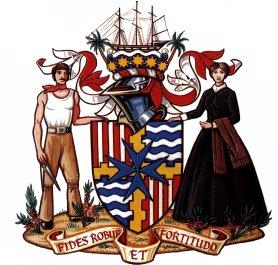 The red quarters with white stripes refer to the local timber milling industry, while the wavy blue and white quarters allude to the Mary River, on which the city is founded. The embattled edges of the gold cross, as well as the outer rim of the gear wheels in the crest, symbolise industry. The colour gold recalls the importance of gold mining in early days. The Maltese Cross is the badge of Queensland, thus declaring the city's allegiance to their state.

The schooner emphasizes the importance of shipping to Maryborough, while the cane-stalks represent a flourishing local industry.

The shearer recalls that sheep-farming was the purpose for which the area was first settled, while the lady in a simple black dress honours the part played by pioneering women. She also represents Lady Mary Fitzroy, wife of the Governor, after whom the town was named, following her tragic death. The bottlebrush in the compartment has been adopted as the city's plant symbol.