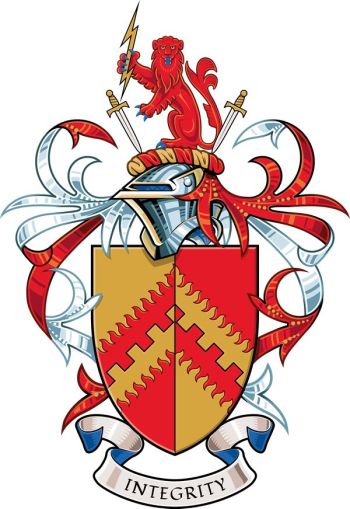 The red lion in the crest is taken from the crest of the borough of Redcar in the UK, which is where the Institute is located. The work of the Institute is in research and technology associated with materials, processing and energy, with particular expertise in metals. The lightning bolt symbolises energy, particularly the high temperatures associated with metals processing. Metals themselves are represented by the swords.

The shield echoes the themes of energy and high temperature, represented in the crest. The colours of red and gold are symbolic of fire and flames and there is a double chevron motif, the lines which are drawn as tongues of flame. The central charge on the shield is a single embattled chevron. This is a conscious acknowledgement of two pioneering innovators in iron and steel, Abraham Darby (1678-1717) and Sir Henry Bessemer (1813-1898).

Darby developed the industrial blast furnace, replacing the previous charcoal fuel with coal, making large scale iron production possible. Bessemer invented and commercialised the Bessemer steel process and developed many other inventions in iron, steel and glass. In researching the arms for the Institute it was discovered that both Darby and Bessemer carried the same embattled chevron on their arms. It is believed that this is the first time such a connection between these two giants of the iron and steel industry has been established and it is assumed that when designing his own arms, Bessemer included this motif as a conscious reference to his continuation of the line of invention established by Darby. For the same reason, the embattled chevron is included on the shield of the Institute as a joint reference to both Darby and Bessemer.

The motto ‘Integrity’ refers to the core value of the Institute in giving unbiased, independent technology advice. It is also a reference to a fundamental property of materials in their application, that they both have integrity and are integral to the performance of the product into which they are manufactured.

Literature : Image and information from https://www.mpiuk.com/coat-of-arms.htm