From Heraldry of the World
Your site history : Mecklenburg-Strelitz (kreis)
Jump to navigation Jump to search 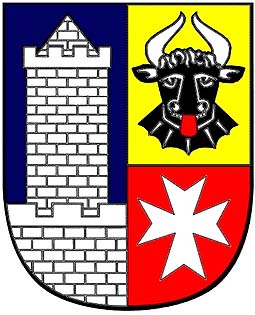 The arms were officially granted on February 27, 1996.

The territory of the new district corresponds with the historical Grand-Duchy and State of Mecklenburg-Strelitz, created in 1919. The tower and the bull's head are derived from the arms of this state. The arms of the State used a simple cross, in the arms of the district this cross is replaced by a Maltese cross for the Order of St. John of Malta who had many possessions in the district until 1648. especially around Mirow and Nemerow.