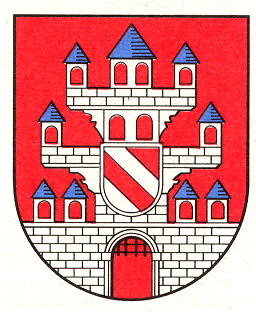 The rms show a city gate with nine small towers. These refer to the war of the Hussites in the 15th century, whereby 9 towers were destroyed in the city. The small shield shows the arms of the Lords of Schönburg, who ruled the city and surrounding are from around 1300 until 1500. Before 1897 the arms were slightly different, with the small shield in the gate and the small towers were differently placed and coloured. The seal of the city from around 1900 also seems to show a slightly different composition of the towers (in three equal rows).