From Heraldry of the World
Your site history : Meisenheim
Jump to navigation Jump to search 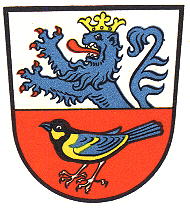 Meisenheim became a city in 1315. The city rights were granted by King Ludwig of Bavaria. The town was owned since the 12th century by the counts of Veldenz. The arms are based on the first seal of the town, dating from the 14th century. It already showed the lion and the tit.

In the 18th century other arms appeared on the seal of the town. These arms showed the lion over a cross-chequered field. The tit was places on an escutcheon. The arms thus reflected the fact that the counts of Veldenz were replaced by the Wittelsbach family in 1444 (see Veldenz). The arms of the Wittelsbach family are a cross-chequered filed of white and blue (see also the arms of Bavaria).