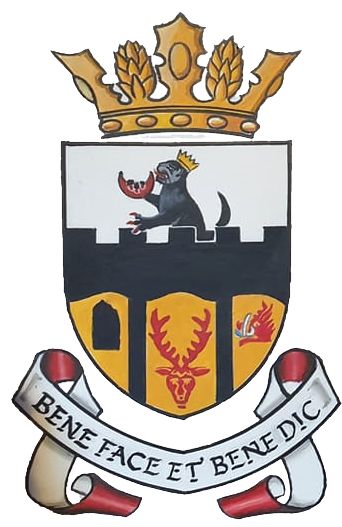 Per fess Argent and Or, a demi-otter in chief Sable, crowned of the Second and bearing in its dexter paw a crescent Gules, issuant from a fess of the Third embattled in chief wavy in base, and in base a buck's head cabossed of the Fourth between two pallets accompanied in the dexter flank by a standing stone of the Third and in the sinister flank a boar's head erased of the Fourth, armed proper and langued Azure. Above the shield is placed a coronet appropriate to a Community Council; a circlet richly chased from which are issuant four thistle leaves (one and a half visible) and four pine cones (two visible) Or.

The design is largely based on the arms of Old Meldrum (upper half, boar's head, colours and motto), with changed/additional elements for the two other villages.