From Heraldry of the World
Your site history : Melfort
Jump to navigation Jump to search 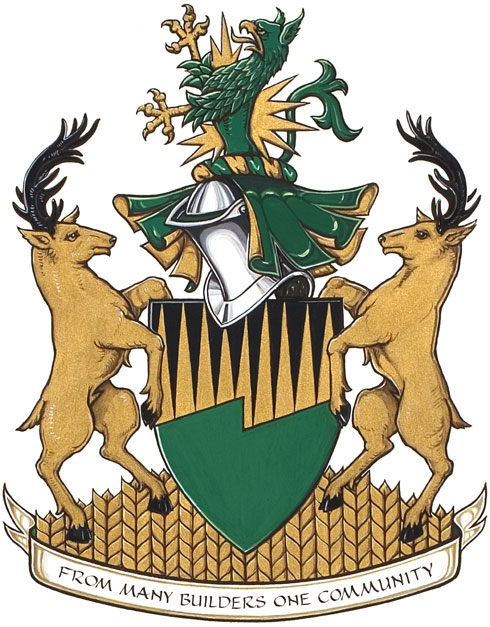 Arms : Per fess bevelled, in chief paly pily Sable and Or, in base Vert.
Crest: A demi male griffin Vert beaked, membered and rayed Or.
Supporters: Two wapitis Or attired and unguled Sable, standing on a compartment tapissé of wheat Or.
Motto: FROM MANY BUILDERS ONE COMMUNITY

The arms were officially granted on September 15, 2005.

Green, gold and black are the city colours, indicative of the rich black soil, the grain belt, and the parkland of the region. The gold rays and the jagged division line indicate the northern lights or Aurora borealis, which give the city its nickname, the “City of Northern Lights”.

The crest uses two of the city colours, which are also the provincial colours. The griffin is a powerful creature that guards treasure, and here it represents stewardship of the riches of the land. This type of griffin is shown with rays, which furthers the allusion to the northern lights in the arms.

The wapiti are shown in the other combination of city colours, and allude to the nearby Wapiti Regional Park. The base of wheat refers to the agricultural base of the local economy.