From Heraldry of the World
Your site history : Menslage
Jump to navigation Jump to search 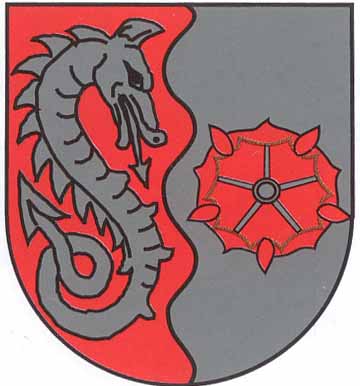 The arms show a dragon and a rose. The rose is taken from the arms of the Lords von Darlage, who lived in Hahlen and Herbergen and owned the jurisdiction in Menslage. The dragon is the symbol of the Artland region, and is first seen in the local churches from around 1572. Since the 19th century the dragon is used as the trademark of the local furniture industry. The colours are those of the Diocese of Osnabrück. The wavy division line is also taken from the arms of the Samtgemeinde Artland and symbolises the Hase river.