From Heraldry of the World
Your site history : Meschede
Jump to navigation Jump to search 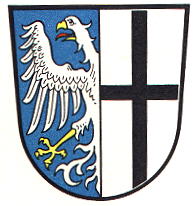 Meschede received city rights from Dietrich II von Moers, Archbishop of Köln, in 1457. The oldest seal dates from 1488 and already shows the present arms. The arms are a combination of the eagle of the Lords of Arnsberg and the cross of the State of Köln. The area was part of the County Arnsberg until 1368, when it became part of Köln. The arms have thus never changed since.